The recent decision in McWilliam v Hunter [2022] NSWSC 342 serves as a reminder for developers to carefully consider and investigate encumbrances on land earmarked for development.

The proceedings concerned a right of carriageway 3.05 wide that burdened the defendant’s land (“Lot A”) and benefited the plaintiff’s land (“Lot B”) (“Easement”). The Easement provided the only existing means of vehicular access to Lot B. The Easement was created pursuant to a s88B Conveyancing Act 1919 (“the Act”) instrument and accompanying deposited plan, registered in 1980.

The defendant sought to develop Lot A, which would involve the erection of a structure to sit above the Easement and consequently restrict the height to which the Easement could be used. Development consent conditions imposed by the local council included, among other things, that the structure allow a clearance height over the Easement of 2.8 metres.

The defendants cross-claimed and sought an order to modify the Easement such that it be limited in height to 2.8 metres. It was submitted that the dimensions of the Easement and the improvements positioned on Lot B at the time of creation of the Easement (notably a single garage) should lead to the conclusion that only vehicles that would be accommodated by that small single garage were contemplated for use of the Easement.

Justice Darke determined that the terms of the Easement should not be construed in such a way that the rights conferred by it are restricted so that the range of vehicles that might be employed in its use are restricted to passenger vehicles that can be accommodated in a single garage. The imposition of a height limit of 2.8 metres, as would occur if the defendants proposed development proceeded, would amount to a substantial inference with the reasonable use and enjoyment of the Easement.

Developers should be mindful of the competing interests of a developer’s entitlement to make use of their land as they see fit and the proprietary rights of neighbouring landowners to use easements without unreasonable interference.

In assessing those competing interests, developers ought to understand that: 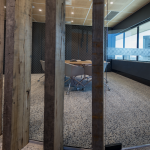